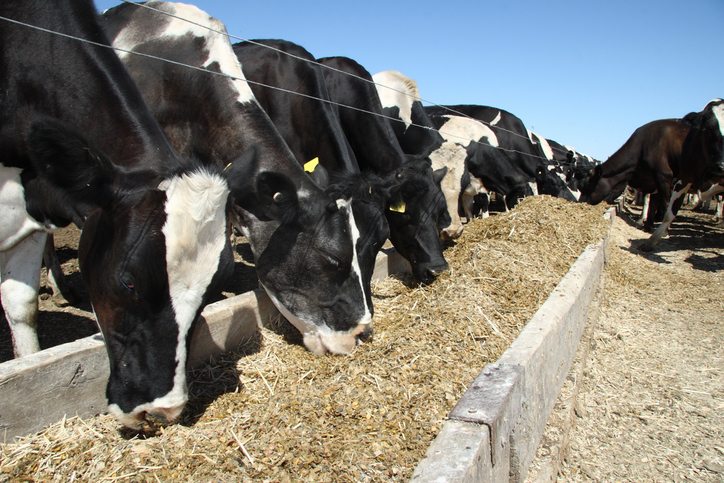 In barns and stalls, “foul-smelling gases latch on to dust particles that have a positive molecular charge. Zeolite molecules have a negative molecular charge, so they act like magnets to attract dust particles, thus helping clear the air of odors as well as dust” (Hill, 2012, p. 46). Trainers have found that placing an open-topped container of zeolite near stalls helps to absorb odors and dust in the air (Hill, 2012).

THE BODY OF LITERATURE PRODUCED BY THE SCIENTIFIC COMMUNITY SUGGESTS THAT SUPPLEMENTING FEED WITH NATURAL ZEOLITES, SUCH AS CLINOPTILOLITE, PROMOTES PERFORMANCE AND OVERALL HEALTH IN LIVESTOCK.

Significant benefits include decreases in the severity and duration of diarrhea and reduction in intestinal disturbances (Papaioannou et al., 2005). This benefit is attributed to zeolite’s water adsorption properties, which results in drier and more compact feces. Also, study findings indicate that zeolite promotes blood serum antibodies that fight against E. coli and toxic effects of mycotoxins in blood streams.THE BODY OF LITERATURE PRODUCED BY THE SCIENTIFIC COMMUNITY SUGGESTS THAT SUPPLEMENTING FEED WITH NATURAL ZEOLITE, SUCH AS CLINOPTILOLITE, PROMOTES PERFORMANCE AND OVERALL HEALTH IN LIVESTOCK.To examine the effect of natural zeolite on young calves, Mumpton (1985) studied a group of heifers fed a diet of grass and hay. During this 180-day trial, half of the group (experiment group) received a supplement of 5 percent clinoptilolite zeolite. Mumpton found that the experiment group gained 20 percent more weight than the other animals. Although the calves in the experiment group did consume more feed, the feeding cost per kilogram of weight gained were less than for animals on a regular diet (Mumpton, 1985). Calves in the experiment group also experienced a reduced rate of diarrhea and soft feces. Excrement also contained fewer particles of undigested solids.

A study by Mohir et al. (2008) examine how the use of natural and synthetic zeolites in animal nutrition increases health, performance, and protects against mycotoxins. A group of thirty calves were divided into three groups, two of which received feed supplemented with clinoptilolite zeolite. Blood samples from all groups were collected over a period of 42 days and scientist measured the total protein, albumin, beta and gamma globulin. The results indicated that clinoptilolite supplements had significant positive effect on the values of hematocrit, red cell count, hemoglobin, and albumin.Pourliotis et al. (2012) examined the effects of clinoptilolite zeolite on incidences of diarrhea and blood serum antibody levels that fight E. coli. A group of 84 Holstein calves were divided into three groups and fed a diet of colostrum and milk; two groups also received clinoptilolite supplementation at a rate of 1 g/kg BW/d and 2 g/kg BW/d. All calves were monitored daily for diarrhea, and antibody levels against E. coli were measured in blood serum at birth, 12, 24, and 48 hours after calving (Pourliotis et al., 2012). The results indicated that calves fed zeolite had higher levels of blood serum antibodies and reduced incidences of diarrhea. The study demonstrated that clinoptilolite zeolite can enhance intestinal absorption of antibodies and remove excess liquids from feces.

Natural Zeolite and the Prevention of Milk Fever and Ketosis

Astudy by Papaioannou et al., (2005) examined the potential use of natural and synthetic zeolites in the prevention of milk fever, a disorder found in dairy cows close to calving. This ailment is linked to a metabolic disease caused by low blood calcium levels. Previous evidence suggests milk fever can be prevented with low calcium diets during the dry period (Papaioannou et al., 2005). The objective of the study was to reduce the bioavailability of dietary calcium in the gastrointestinal track through the administration of zeolite. Results demonstrated that the administration of zeolite as an oral drench or feed supplement during the last month of the dry period and the onset of lactation did in fact reduce the bioavailability of calcium and prevented disease; dairy cows that received receiving a feed supplemented with clinoptilolite zeolite at a level of 2.5 were less susceptible to milk fever. Also, the animals that received clinoptilolite responded faster and more efficiently to the drop of serum calcium observed on the day of calving and did not show any signs of milk fever in the following days (Papaioannou et al., 2005).

Another disorder common in dairy cow populations in Ketosis, a metabolic disorder that occurs when energy demands (such as milk production) exceed energy intake and results in a negative energy balance. One of the side effects of Ketosis is low blood sugar concentrations. Research suggests that the best strategy to prevent ketosis in cows is to improve energy uptake in the dry period and during lactation (Papaioannou et al., 2005). A study by Katsoulos et al. (2006) found that putting dairy cows on a diet supplemented with clinoptilolite at a level of 2.5 percent resulted in a significantly lower incidence of ketosis (5.9%) during the first month after giving birth. The results suggest that clinoptilolite improved the energy status of the dairy cows due to in part to improvements in digestion and the post-ruminal digestion of starch (Katsoulos et al., 2006).

The Effect of Natural Zeolite Diets on the Health of Ruminants

Studies by Papaioannou et al. (2005) and Mumpton (1985) examined how to prevent the effects of toxic levels of rumen pH, ammonium, and ammonia in ruminants (e.g. cattle, sheep, goats) by adding a clinoptilolite zeolite supplement to feed. Researchers found that a supplementation level ranging from 5 to 6 percent reduced ammonium concentrations in rumen by 15 percent. Essentially, ammonium was immediately held in the zeolite structure until sodium entered rumen during the after-feeding fermentation period. This process allowed for easy assimilation of rumen micro-organisms into the digestive system and protected animals against the buildup of toxic levels of ammonia in their systems.

ZeoliteMin focus more development of natural zeolite clinoptilolite in the future,and would help you solve more technology situation and provide the best quality products and service.In order to best assist you, please contact with us soon. Where to buy zeolite