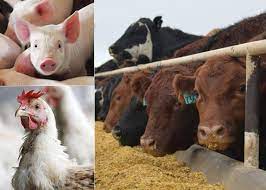 Zeolite clinoptilolite is organic certified, stable and non-toxic. This, combined with their other unique characteristics, allows them to be used as feed additives with multiple, complementary benefits. Zeolite animal feed additive will also absorb odors from spoiled grain or feed grain and will substantially reduce odors in enclosed animal facilities.The introduction of zeolite as an animal feed additive provides the following rewards:

Zeolite clinoptilolitehas EU approval for use in the swine and poultry industry. Though not currently approved in North America for mycotoxin binding, zeolite is the standard for a mycotoxin binder in many countries and also Europe by absorbing a broad Spectrum of toxins. It also helps control aflatoxins in animal feed which lowers mortality rates from digestive stress and reduces the need for antibiotics and medicines. In Europe antibiotics are not used when using zeolite clinoptilolite ( not molecular sieve ) in feed
After years of successful field testing many feed suppliers and end-users have included zeolite clinoptilolite in animal feed additives (around 2% to 5%) in their feed supply program. There is an overall improvement in growth and health of these animals as a result